Google Play+ or Apple App Store (for the people)

May 10th, 2012 - 02:51am
By Jon Jordan, Contributing Editor
Back in autumn 2011, it was considered Facebook blinked over its HTML5 app platform codenamed Project Spartan.

Nine months on, however, it appears to have stepped up to the plate, albeit a different plate.

It's just launched the Facebook App Center - the place to find social apps, both free and paid.

As well as being live on the web, this distribution platform will also be available via Facebook's iOS and Android apps, and all apps that use Facebook, Canvas, HTML5 or are native can sign up to gain discovery.

"For the over 900 million people that use Facebook, the App Center will become the new, central place to find great apps like Draw Something, Pinterest, Spotify, Battle Pirates, Viddy and Bubble Witch Saga," says Facebook developer Aaron Brady.

Maybe you could consider it Google Play plus or Apple App Store (for the people).

Developers will have to ensure their apps use Facebook Login to get listed. They'll also be encouraged to create their own app's detail page. 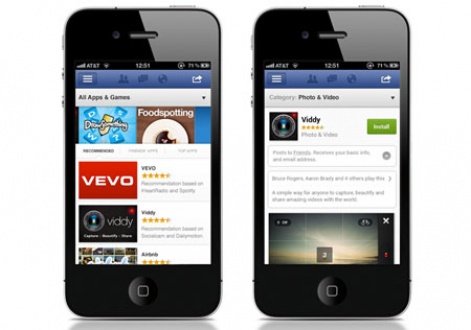 In terms of how the system will work, if you're after an iOS or Android app, you'll be pushed to the relevant app store. Facebook apps - well - you'll already be using Facebook.

Obviously, any payment will be required via individual app stores, while Facebook will handle both in-app purchases and straight paid apps using Facebook Credits as well as its extended beta payment program.

Facebook App Center will be rolled out in the coming weeks.