PopCap turns to GREE to tailor Bejeweled for Japanese push 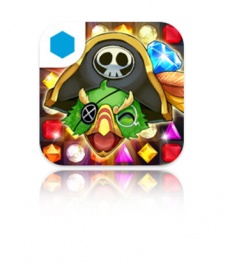 June 6th, 2012 - 03:20pm
By Keith Andrew
Adding to GREE's partnership with Take-Two label 2K, the Japanese social gaming specialist has unveiled a deal with another western outfit to bolster its platform's library in the region.

EA-owned PopCap is to take an all new, exclusive version of Bejeweled to both iOS and Android in Japan through GREE's platform, with the firm looking to crack the lucrative social gaming market in the region.

A legend is born
Bejeweled Legend has a mission based structure that builds on the gem-matching set up of the original game, with social elements built around play rather than fused into its core.

The game is currently due to be released in Japan only, but has to be downloaded via a separate app from either the App Store or Google Play rather than playing from within the browser version of GREE.

"We're delighted to see our collaboration with PopCap Games culminate in the release of such a globally popular title," GREE's senior VP of marketing and developer relations Sanku Shino.

"This game has the potential to be a great addition to the lineup of available titles on the GREE platform. We want to build a global platform serving more than a billion users, and teamwork with partners like PopCap is key to achieving that goal."

PopCap claims GREE worked "closely" with its development team to tailor the game for the Japanese market, with the firm looking to introduce a "new audience" to the Bejeweled brand, which has been a massive hit across multiple platforms in the west.
Bejeweled's move east, however, comes as GREE itself is looking to expand its presence in the west.

The social giant is currently attempting to make waves at E3 in Los Angeles ahead of the full launch of its global mobile gaming platform later in 2012.