June 7th, 2012 - 04:07pm
By Keith Andrew
Paying heed to the adage 'time is money', Facebook has updated its in-app payment process for mobile web releases, with a view to streamlining the whole flow.

The change  to be rolled out first in the US and UK  is designed to cut down paying for in-app purchases from the seven steps users previously encountered to a more manageable two.

"Today we are starting to roll it out. This low friction - two steps - carrier billing is now available on the majority of carriers in the US and the UK and will be rolled out to additional operators worldwide.

"The payment flow is simple. Users who want to pay for a virtual or digital good in a mobile web app open the payment dialog and confirm their purchase." 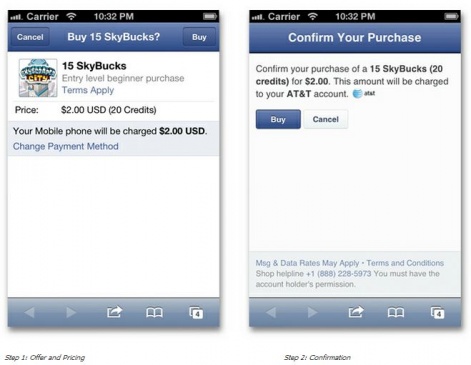 Facebook claims developers who have already integrated Facebook Payments into their mobile web apps don't need to do anything to implement the changes.