Founded in January 2011, the company, which has offices in Milan, Italy and Palo Alto, USA, gained the investment from Italian VC outfit Innogest Capital.

It says it will use the money to expand in North America and Asia, notably investing in sales and partnerships with brands and developers.

Part of the fast expanding mobile monetisation business, Beintoo mixes traditional advertising models with virtual incentives so users are rewarded for their in-game activity such as posting score to leaderboard and winning challenges, as well as when interacting with adverts and other offers.

In this way, developers using the platform get better user retention while users build up their credits or Bedollars to use in real world situations such as discount coupons. 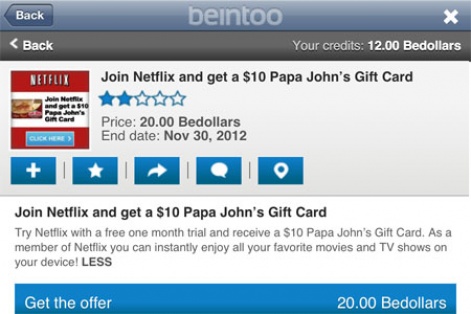 Beintoo is particularly strong on Android where it's used in games such as Halfbrick's Fruit Ninja (shown above), also supporting iOS, and other platform such as Unity, HTML5 and web.

"Beintoo has a unique proposition for app developers and retailers, and results speak for themselves: a very young and motivated international team reached out to more than 100 million devices in less than a year," said Claudio Giuliano, Innogest's managing partner.

"Add this to the quality of Beintoo's special offers and you will obtain a company that stands out in the mobile monetisation ecosystem."

Competitors operating in the space include the likes of Kiip, Tap.Me, Tapjoy and Fiksu.

You can read more about Beintoo's vision in our interview with its CEO Antonio Tomarchio.


Get the latest mobile games news, interviews and in-depth analysis on Twitter, Facebook, LinkedIn and our daily newsletter.