The roadmap suggests both devices will hit first in Europe during the first week in January, expected in North America a month later.

The aforementioned London appears to be a full touchscreen device similar to the BlackBerry 10 Dev Alpha hardware RIM distributed amongst developers at its BlackBerry World 2012 conference.

Nevada, however, looks to be a more typical BlackBerry device, sporting a physical QWERTY keyboard.

The BB 10 delay has also impacted PlayBook. The document points to the release of a revised PlayBook 4G SKU in Q4 2012, with a 10-inch variant  codenamed Blackforest  launching in Q3 2012.

Only the latter, however, will sport BB 10 out of the box, with the existing PlayBook and its 4G successor offered the platform via an update in the first half of 2013. 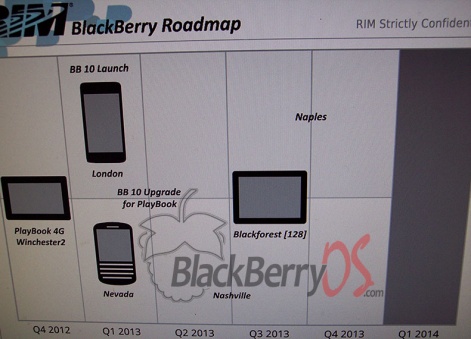 Other hardware cited by the roadmap include the Nashville (down to launch in Q2/Q3 20113) and the Naples (expected Q3/Q4 2013). Speculation suggests both are likely further BB 10 handsets, though the document itself does not confirm this.