July 4th, 2012 - 01:17pm
By Keith Andrew
Jelly Bean (aka Android 4.1) may be making its debut with the launch of Nexus 7, but according to stats released by Google, its predecessor has only just passed 10 percent Android penetration.

Numbers sourced during a 14 day period ending 2 July suggest Ice Cream Sandwich - which was launched nine months ago - is currently equipped on a total of 10.9 percent of Android devices.

That makes it the third most used version of Android.

Topping the list is Gingerbread (2.3.x), which  a year and a half after launch  is installed on six out of every ten active Android devices in the hands of consumers.

Froyo (2.2), which launched back in May 2010, still accounts for more than 17 percent of Android handsets sold, while the tablet-only Honeycomb (3.x) makes up 2.4 percent of devices. 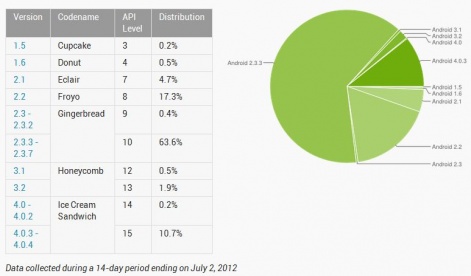 Google recently revealed at its I/O conference in San Francisco that it's currently activating more than 1 million new Android devices every day, with a total of 400 million having been sold since launch.

Ice Cream Sandwich's slow penetration, however, would suggest a large portion of the handsets activated still run older versions of the platform.

This is because it requires higher device specifications and most OEMs limit the ability of users to update their devices to avoid support issues.

To date, devices to run ICS out of the box included Samsung's Galaxy S III and Galaxy Nexus, HTC's One X and handsets in LG's Style series.