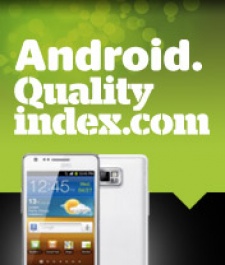 July 8th, 2012 - 10:00am
By James Gilmour, Video Editor
If you were wondering what the best-reviewed Android games on the web last month were, here's the Android Quality Index round-up for June to fill you in.

June was clearly the month of the silhouette platformer on the Android gaming scene, with not one but two visually minimalist offerings leaping into the Android Top 10.

In thought-provoking platformer Continuity 2, Noodlecake has tinkered with the genre formula slightly by introducing a tile-rearranging element into proceedings, thereby forcing you to manipulate the environments and then push forward - an innovation which has propelled the title to the top of the chart.

Meanwhile, the shadowy Oscura has brought haunting visuals and clever controls to the table, earning it critical acclaim and a very respectable sixth-placed finish.

It wasn't all about platformers in June, though - Kairosoft's latest time-management title Pocket Clothier helps maintains the company's impressive track record of producing compelling mobile sims on a regular basis, ensuring it - cough - sews up second position on our rundown.