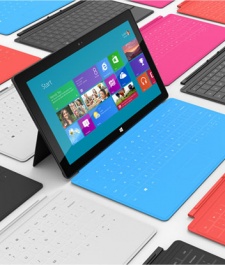 Speaking at Microsoft's Worldwide Partner Conference, Tami Reller explained that the company's tablet and PC OS would release to manufacturers in August, with general availability following in October.

When the device was unveiled, Microsoft promised that Surface for Windows RT would "release with the general availability of Windows 8."

Samsung is also readying a Windows RT tablet for an October launch, according to Bloomberg's sources.

The device will feature a Snapdragon processor from Qualcomm, according to "people with knowledge of the matter."

Dell, Toshiba, Asus, and Acer are all also working on various Windows RT and Windows 8 tablets. HP is developing a Windows slate, but has claimed 'customer input' persuaded the company to support Windows 8 and not Windows RT.

Celebrate the holiday season next week with the industry at the Pocket Gamer Xmas Mixer!