July 31st, 2012 - 04:00pm
By Keith Andrew
French app discovery specialist Appsfire has launched a dedicated app tracking release onto the App Store, helping developers follow both a game's rank and its progression on Apple platforms.
Appstatics is actually a re-release, with the app having been acquired from Mos Teknoloji (Mos IT) after Appsfire claimed it was unable to find a tracking service that worked adequately on device.

"We've been ourselves looking for something like that for a long while," the firm said in a statement.

"We tried a variety of solutions like AppAnnie - a great service by the way - which works well on the computer, but was very impossible to use on the mobile. 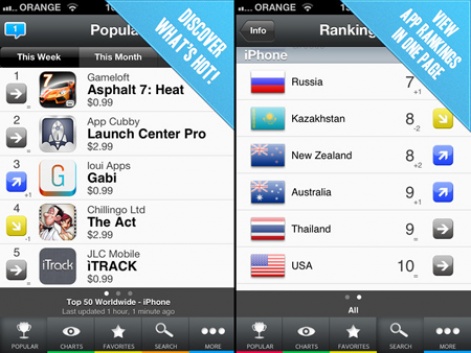 "We were even thinking about building one from scratch. Then we discovered that a couple of guys created Appstatics - a wonderful app to do exactly that - and we believed it would be a great foundation for what we wanted to do."

Appsfire claims the app has been tweaked before being republished, however, branding it as a "simple and elegant solution" for those wishing to track their iOS releases on an iPhone.

Developers can see the progress their apps have made across the App Store for both iPhone and iPad as well as the Mac App Store with "just one click", with Appsfire also strapping on the ability to track the global free and paid ranking in any country.
Appstatics, which will usually be priced at $1.99/£1.49, is also free for its first week on the App Store.