NYGC12: Five top quotes from state of the industry panel

#nygc12 How mobile is changing everything

September 5th, 2012 - 06:50pm
By Matthew Diener, US Correspondent
Set in the heart of the New York financial district, the NY Games Conference 2012 kicked off with a state of the industry panel from various luminaries.

Taking topics ranging from the best monetisation and distribution models to cross-platform strategy, those in attendance included executives from social gaming companies like RockYou and Zynga, to mobile giants such as Rovio and even a console outfit like Avalanche.

Here are five of the most significant quotes from the opening panel.

1. "Moving to mobile is going to be a challenge for the whole industry. How to stay afloat in this world will be something that all companies will need to figure out."
Anders Lindeberg, head of investor relations, Rovio

Founded in 2003 as Relude and struggling until Angry Birds finally took off in 2009, Rovio has learned the industry the hard way. But despite its focus on mobile, Lindeberg said Rovio sees Facebok as a viable platform and plans to continue its presence there. However, it will make sure it also appeals to a variety of platforms.

"Don't make yourself entirely dependent on one platform or you'll get hurt," cautioned Lindeberg. 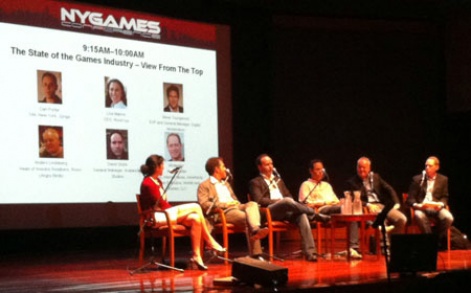 2. "90 percent of the games our there [on phones] are very solitary. They don't connect with people. Why was Draw Something good? Phones connect people, and so that's what we did."
Dan Porter, GM New York, Zynga

Previously CEO of OMGPOP prior to its $210 million acquisition by Zynga, Dan Porter drew an early distinction between 'serious' games and the casual, social games which are enjoying a boom on and off of Facebook.

At its peak, Draw Something was the #1 game in 81 countries. Of course, this was helped by its reliance on visual language, not actual language. As another example, he highlighted the tutorial in Rovio's Amazing Alex as a great example of how this can be accomplished.

3. "It all starts with building for consoles ... Your mobile phone can be a console if you're satisfied with last generation technology."
David Grijns, GM, Avalanche Studios

As the sole representative of traditional console development, Grijns argued the doom and gloom surrounding the state of consoles games is very much exaggerated.

That said, he acknowledged the strength and value of digital content, viewing retail sales and DLC as a 50/50 revenue split. Grijns suggested that young indie developers will find a place on the XBLA and PSN of next generation consoles, which may lure them away from mobile development.

It's clear that mobile games are taking up the majority of our spare time throughout the day, according to Youngwood, but his data suggest consoles are still the driving force of the games industry.

Yet despite that, he argued the rise of mobile is forcing ever higher quality standards. "Mobile is not where mediocrity doesn't survive, it's where an A- doesn't survive," he said.

5. "We focus on content that is snackable; 3-10 minute sessions in quick bites."
Lisa Marino, CEO, RockYou

Marino was the first person to mention the structural shift in how users engage with Facebook, as their primary medium shifts from computer to mobile.

Although RockYou still believes traditional online platforms are viable, it's invested heavily in Facebook Mobile. The context is it believes social games such as CityVille or ZooVille are too involved for iPhones and tablets.

To succeed in the new mobile market, Marino believes that games must be very casual and friendly.

NYGC12: GREE and DeNA are spending for success but quality and virality are best, says distribution panel