The first, in truth, is little more than an update to the existing 7-inch model, boasting a faster processor, twice the RAM, longer battery life, and a 40 percent jump in performance.

Available for pre-order now  in the US, at least  the $159 device will officially launch on 14 September.

Stealing the headlines, however, were three brand new models.

None of them are to take the Kindle Fire 2 name, as many had predicted. Rather, they're to be sold under the Kindle Fire HD moniker, coming in both 7-inch and 8.9-inch form.

"Last year, there were more than two dozen Android tablets launched into the marketplace, and nobody bought 'em. Why? Because they're gadgets, and people don't want gadgets anymore.

Despite such an assertion, as a a series of 'gadgets', Kindle Fire HD impresses. 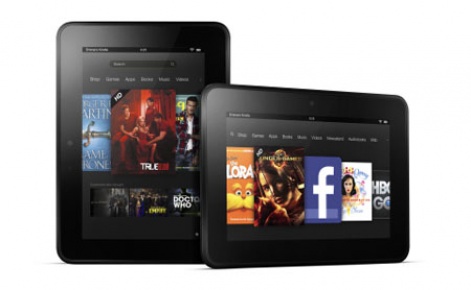 Bezos claimed that added power also requires added on board memory. Amazon is deliberately pitching it as an HD device, meaning the file size of the games that run on it will be larger.

As such, he declared 8GB as "dead on arrival" for an HD device.

As for the games themselves, Amazon has adapted its Whispersync cloud save software to remember where players were on a game, even if they uninstall it.

"I am amazed at how many games we've sold on the Kindle Fire," stated Bezos.

"There's one very annoying thing about tablet games: you get 30 levels unlocked, and then for one reason or another you have to reinstall or you get a new device, and you lose all your unlocked levels and have to start over."

Bezos also unveiled Kindle FreeTime, which will allow parents to set limits for the amount of time children can play games on the device, as well as Amazon's own take on an achievements system and its own real rewards system. Of course, this plugs into items bought through the online marketplace.

Little detail was given as to the 7-inch HD version  indeed, it was actually only mentioned in passing at the very end of the presentation  though it's set to launch on 14 September for $199.

The standard 8.9-inch version will launch two months later on 20 November, coming in at $299.

For $499, consumers will be able to pick up an optimum 8.9-inch Kindle Fire HD equipped with 4G LTE wireless, also sporting with 32GB of storage.

Amazon was keen to point out that, altogether, that brings the 4G's SKU's year one cost to $549  it's a figure that compares favourably to the latest iPad's $959 price tag.

Surprisingly, however, no word was given on any European releases for the new range of Kindles, despite Amazon having launched its Appstore for Android in the five key European countries earlier in September.