A5 chip on board, 4-inch display 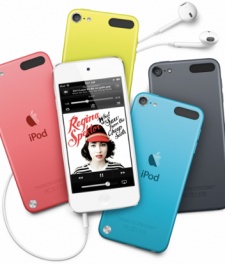 This is the first update to the touch in two years, and it follows the iPhone 5's lead in being both slimmer and lighter.

Actually, it follows iPhone 5's lead in most every way possible continuing the iPod touch's tradition of being an iPhone without the phone functionality.

The anodized aluminum case of the 5th generation iPod touch makes it a mere 6.1mm thin and allows it to weight in at a nimble 88g.

Also falling in line with the iPhone 5, the 5th generation iPod touch will boast a 4-inch display.

Beneath that impressive piece of glass is Apple's A5 dual-core processor, which will power the new iPod touch. Not quite as fast as the iPhone 5, and its A6 chip, then.

Got you in my iSight

Apple also put its new iSight camera - debuted for the iPhone 5  in the new iPod touch, albeit in a slightly less powerful 5-megapixel permutation. It will still support faster image capture and the recently announced panorama, however.

These features place the iPod touch in line with many of the more powerful point and shoot cameras on the market, and Apple knows it.

To help the iPod touch fill the role of a pocket camera, Apple added a special lanyard/wriststrap connector called 'The Loop' which will allow users to keep an extra tether on their iPod Touch whilst snapping photos.

Much like the iPhone 5, the iPod touch also saw a bump in its front-facing FaceTime camera moving up to an HD (720p) resolution.

For the first time, Apple announced that the 5th generation iPod touch will come in a suite of colours with matching loops.

Consumers will be able to choose between silver, black, powder blue, metallic green, and a (Product) Red model, among others.