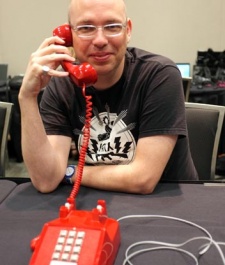 But perhaps with a tear in the eye. For after 10 conferences in Austin, Texas, 2013 will see the show reborn and remade in Los Angeles as GDC Next.

It's not the most popular location for a game show, but it's one EVP of organiser UBM TechWeb Game Network Simon Carless reckons will provide the best opportunity to reinvent the conference.

"We're very fond of Austin, but GDC Online was here because Austin was an MMOG town. That's changed," he says.

"Also I think a lot of people forget how much downtown LA has improved with the new hotels and LA Live."

His wider point is that more than 45 percent of the US games industry is based in California, making LA a good location from them, as well as international travellers, both from Europe and Asia.

In contrast, there are many fewer internal flights to Austin, while the two hour time difference to the west coast makes it unlikely that people in the Bay Area will pop down for the day.

But the change isn't just about location.

All about the apps

As GDC Online becomes GDC Next, the show will embrace the explosion in free-to-play digitally distributed games in which platforms matter less and everything is connected.

In addition, alongside GDC Next there will be a companion conference called the App Developers Conference.

"We perhaps haven't marketed this fully yet, but it's all about non-gaming apps," Carless says. "We want to create a GDC for app developers."

It's certainly something that the LA location plays into with plenty of music, movie and entertainment companies in that part of California.

And while the two shows will be run as separate events, there will also be opportunities for crossover in terms of content and audience.

GDC Next and App Developer Conference will take place at the LA Convention Center from 5 - 7 November 2013. More details will be announced in due course.