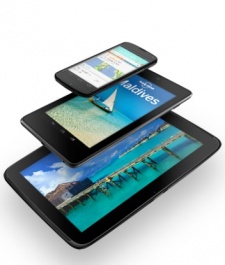 The Nexus 4 is a 4.7-inch smartphone made by Korean electronics firm LG. The device boasts a 1280x768 display, runs Android 4.2 and is powered by a 1.5 GHz Qualcomm Snapdragon S4 processor.

The Nexus 10 is manufactured by Samsung and is the first full-size tablet to join the Nexus family of products. The slate's 10.1-inch display has a resolution of 2560x1600, which means the device pushes more pixels per inch than the latest retina-equipped iPad.

Google has also updated its Nexus 7 offering to coincide with these product unveilings. The 8GB Nexus 7 has been quietly killed off, while the 16GB model has had its price cut to $199.

Two new Nexus 7 models will join the range of Asus-manufactured tablets  a 32GB Nexus 7 will retail for $249, and a 32GB model equipped with HSPA+ mobile internet will cost $299.

The standard 16GB and 32GB Nexus 7 models are available for purchase now. The HSPA+ Nexus 7, the Nexus 4 and the Nexus 10 will all launch on 13 November 2013 in US, UK, Australia, France, Germany, Spain and Canada.