November 19th, 2012 - 09:28pm
By Jon Jordan, Contributing Editor
There are few things I like better than a graph, so thanks to Korean publisher Gamevil for supplying one to start the week.

It's no stranger to successful games, having posted notice of 100 million iOS and Android game downloaded earlier in the year.

At its rate of +8 million downloads/month, we reckon it's close to 200 million now, but instead of going macro, the company has confirmed its comedy beat-'em up Punch Hero has now been downloaded over five million times.

Developed by COCOSOFT, as part of Gamevil's big third party developer push during 2012, the free-to-play game was released in May for iOS and August on Google Play.

It had previously been released on domestic carriers - such as SK Telecom's all-important Android-oriented Tstore - in June.

As you can see from the green line on the Gamevil-provided chart, growth took off following the Google Play launch - going from just over two million downloads to five million, before plateauing during November.

Another view is provided by the Google Play chart, which shows downloads over the past 30 days, albeit without a scale. 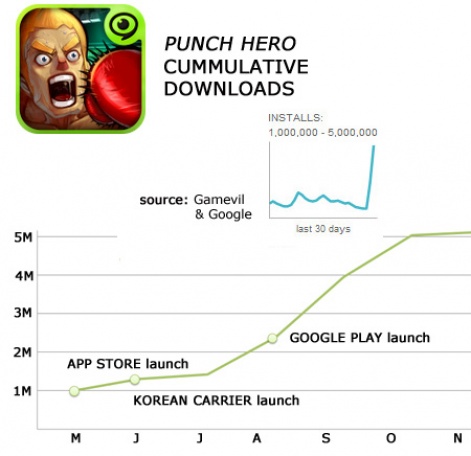 I've got all creative and added it into the mix. It appears to show a massive growth in downloads over the past few days; interestingly not something reflected in Gamevil's official chart.

Still, I think we can all agree Punch Hero has found an audience... on Android devices.