December 6th, 2012 - 04:00pm
By Jon Jordan, Contributing Editor
With the top grossing charts in 2012 ruled by free-to-play games, it's no surprise that in-app purchase are industry's key driver.

However, according to research from monetisation experts W3i, not all IAP are equal.

As has been previously suggested by individual developers at an anedoctal level, most revenues are being generated by transactions of $9.99 or more.

Transactions from $0.99 to $1.99 only contribute an average of six percent to total game revenue.

The research was based on data from hundreds of W3i's partners, accounting for 66 million monthly active users across iOS and Android. 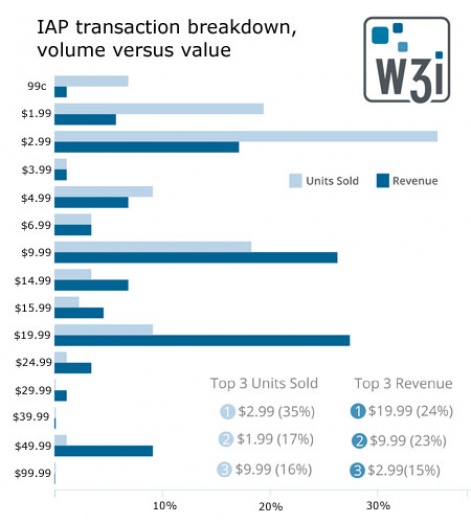 Looking down at how the data varies between countries, W3i found that the UAE and Japan were the most lucrative markets.

55 percent of revenue in the UAE came from $19.99 transactions, while it was 43 percent in Japan.

$9.99 was the key transaction amount in Canada and China, respectively making up 33 percent and 29 percent of revenue.