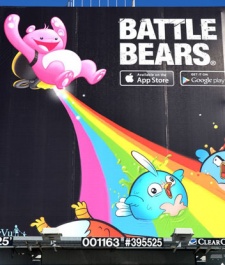 And that's exactly what developer SkyVu has been up to as its Battle Bears franchise hits the big 2-0 mark.

Keeping the downloads ticking over, Battle Bears Royale has just gone live on Google Play, with Google set to feature the game during the holiday season.

The company raised its first round of finance in the summer, and is pushing forward with an animated TV show too.

CEO Ben Vu also reckons there's been an uplift of downloads since the posters have gone live.

That's not a crazy idea either. Back at GDC Online, William Volk from PlayScreen reckoned he got a CPI rate of $1 from a single well-positioned billboard in Las Vegas. Although it was for a casino-style game. 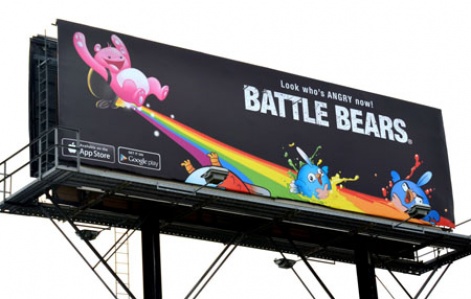 We think the best titbit, however, is that San Francisco's advertising authorities wouldn't allow Huggable bear to be farting a rainbow at some angry birds, so the pot-o-gold was added.

Sponsored feature: SkyVu's Ben Vu on why Battle Bears is all fired up on the GREE Platform

SkyVu in no doubt mobile will 'only get more competitive'