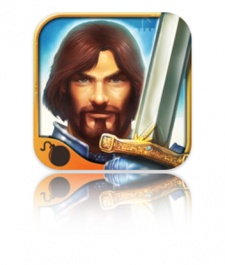 December 21st, 2012 - 04:00pm
By James Nouch, Staff Writer
Following Apple's announcement that Kingdoms of Camelot: Battle for the North was the top grossing iPhone game of 2012 in the US, free-to-play developer Kabam has released a series of stats to celebrate this "landmark year."

Furthermore, Kabam is one of several companies to move away from a dependence on Facebook this year.

70 percent of the company's revenue now comes from the web and mobile devices  an impressive transition for a company that was previously 100 percent dependent on Facebook.

Star of the show

Kabam also talked up its expanding team, its new offices and the strategic acquisitions it made throughout 2012  including Fearless Studios, Wild Shadow Studios, and Balanced Worlds Studio.

But Kingdoms of Camelot's runaway success is undoubtedly the bright spot of 2012 for Kabam, and the studio announced that  since the series first launched in 2009  it has generated more than $100 million in gross revenue for the studio.

"With more than 700,000 applications in the Apple Store, it's phenomenal that Kabam's Kingdoms of Camelot: Battle for the North is number one," said Kabam chief operating officer Chris Carvalho.

Indeed, such is the series' financial success that Kabam believes it is now "one of the top ten strategy game franchises of all time."