The 'GameStick'  which reached its funding target after just thirty hours on Kickstarter  is roughly the size and shape of a USB pen drive, runs the Jelly Bean Android OS and plugs directly into a TV HDMI port.

The console will offer an open platform for developers, and a low price point for consumers. PlayJam is promising a launch price of $79 for the console and bespoke Bluetooth controller, and is targeting an April 2013 launch.

Obviously, $100,000 is a drop in the ocean for an ambitious project such as the GameStick, and it seems likely that the crowdfunding campaign is as much about raising awareness as raising money.

After all, PlayJam has closed funding rounds with more than $5 million of venture capital in the past. The company's Kickstarter pitch, however, insists upon the need for crowdfunding without getting specific about how the money will be used.

"We need support to bring this to market in a big way. It just can't happen without you," reads the campaign page.

"To get to the next step genuinely requires additional, outside support. We need the capital to get GameStick to market."

At the time of writing, 1,700 backers have pledged more than $167,000 to the GameStick project, which still has 27 days left to raise more. PlayJam is understandably pleased with the positive reaction.

"The response from the Kickstarter community has been truly overwhelming. We are confident in our product and what we hope it will mean for gaming but we were taken aback at how quickly the message was adopted," explained PlayJam CMO Anthony Johnson in a statement. 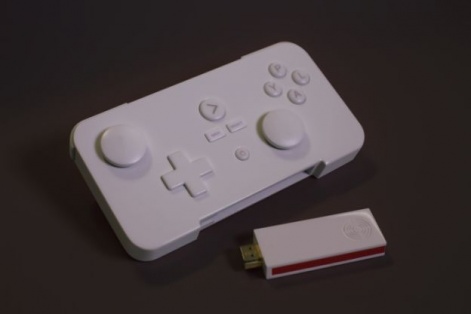 "There is no better feeling than having hundreds if not thousands of people endorse your idea."

Of course, the project shares many similarities with the Ouya, which raised more than $8.5 million back in August 2012, and has been making its way into the hands of developer backers this week.

Both run the Android OS, both are inexpensive and both are pitched as welcoming ecosystems for independent developers and tinkerers.

"While we are shipping as a dedicated games console, we are keen to ensure that users have the ability to hack the device if they so wish and will be providing support for XBMC and DNLA via an optional firmware update in September," explained Johnson.

"We encourage users to hack the device - the time for closed, proprietary systems is ending, which bodes well for true innovation."