Working on a gorgeous, multiplayer-heavy debut 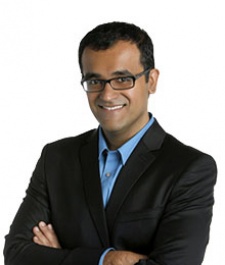 January 15th, 2013 - 05:00pm
By Jon Jordan, Contributing Editor
When you've run the Game Developers Conference, as well as worked for the likes of EA, you've seen plenty about how the industry works.

For Jamil Moledina, who most recently was a VP at San Francisco social publisher Funzio when it was bought by GREE for $210 million, the next challenge is to be doing it for himself, however.

"I've spent time swimming with dolphins and looking into active volcanoes," he says of his leisure activities since leaving Funzio in June 2012.

"But now the stars have aligned. We know there are new ways to bring fun to mobile gaming."

His co-founder at start up Wormhole Games, James Kelm - previously of Apple, Google and Funzio - is even more forthright.

"It's a great time to started," he says, arguing the drive to do something new was more exciting than the financial incentives he would have received by staying put.

Yet, such is the frenzied state of mobile game development in the Bay Area at present, Wormhole Games isn't at the stage of announcing a product.

Taking a leave out of Descartes' book, it's merely announcing its own existence.

Indeed, Moledina is coy about details, other than to confirm the company is working on a 'gorgeous-looking game' with 'strong multiplayer features' that's in 'full production' and will be released in Q2.

"The reason we're talking now is that we want to hire a couple more key people," he says.

Funding to-date has come from friends and family, but a seed round is being worked on, and given the company's co-founders, location, and market conditions is unlikely to be onerous to complete.

Door to a new universe

"I think Supercell has done a great job, as have other companies, but in my mind, I don't think there's one company that's doing all the things we're looking to do," he argues.

"Leadership in the tablet gaming market is still up for grabs."

Continuing the theme, Moledina says there remains a gap in terms of games that are "almost casual in their intuitive gameplay", but that possess enough content to fulfill the mid and hardcore audience, who are prepared to spend big on their gaming.

"The incumbents have to stick to what works for them," he states.

You can find out more about Wormhole Games and its job opportunities via its website.