FGOL points to the future as it breaks 50 million downloads 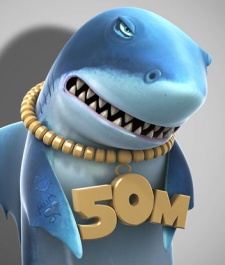 When it comes to mobile gaming that can mean all success is measured - and found wanting - against the likes of Angry Birds'1 billion or Cut the Rope's 250 million downloads.

Of course, these outliers are important to highlight how big the business now is, but that doesn't mean we should ignore the more modest successes that demonstrate the depth and scale of the entire business.

That's the context for the news that Future Games of London has hit the 50 million download mark.

It's not a massive number but in terms of the small London indie, it proves the success of its hard work across iOS, Android and the Amazon Appstore.

Formed in 2009, it's released titles such as Pool Bar, Snooker Club and Grabatron, with its most popular franchise being its Hungry Shark games.

"It's a sign of how big the smartphone tablet market has become, that we can do this in

just three years. We're forecasting even further growth in our year-in-year installs and revenue in 2013".