Despite this winter weather 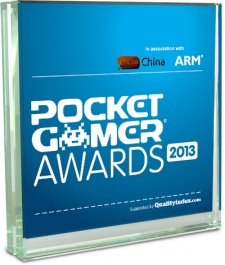 March 4th, 2013 - 02:44pm
By Peter Willington
After less than a week, competition in the 16 categories of The Pocket Gamer Awards 2013 is really starting to heat up, with nominated firms bringing the full force of their respective communities into the voting action.

Sponsored by Cocoa China, Everyplay, ARM, and with support from Quality Index, Free App Alliance and Appromoter, this year's awards will culminate in a gigantic awards ceremony and party at Game Developers Conference in San Francisco.

For anyone who has been to a Pocket Gamer party in the past, they'll know it's sure to be the highlight of the mobile

You can vote in any or all of this year's 16 categories, so you will have the final say on which games and games makers are rewarded for their greatness at our glitzy San Francisco awards bash.

The Best Developer, Best Publisher, Best Game (by genre), Best Game (by format), and, of course, the really big one, Overall Game of the Year, categories will all be hotly contested this time around.