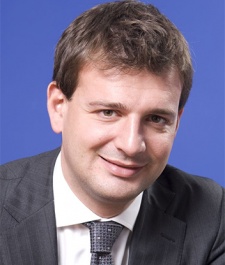 Days after announcing his departure from PopCap, former Bejeweledfranchise manager Giordano Contestabile has been unveiled as the new VP of product management and revenue at Tilting Point.

As you may remember, Tilting Point is the publisher that isn't a publisher: A venture designed to redefine the role of a traditional publishing house, with a view to catering for the needs of the growing number of independent mobile developers.

Contestabile's considerable experience at one of mobile's biggest players, then, will undoubtedly boost Tilting Point's credentials as it looks to meet those goals.

"We are thrilled that Giordano shares our philosophy that the future of video games belongs to the top independent developers," said Tilting Point's executive chairman Tom Frisina.

"His experience and talents will strengthen our partnerships as we redefine what people expect from a digital publisher."

Contestabile, who has enjoyed more than a decade working within mobile gaming, is set to advise on monetisation, retention, engagement, and user acquisition strategies as Tilting Point looks to "align itself" with mobile's rising stars.

With $40 million worth of investment ready to go to boot, Tilting Point isn't playing around.

However, in an era when developers are increasingly inclined to 'do it for themselves', convincing even a share that the firm's publishing suite  which will stretch from funding development to executing "groundbreaking marketing campaigns"  will be no easy task.

"With nearly a billion smartphones and tablets on the market, and a majority of users playing games, the opportunity for independent developers is unparalleled in the history of gaming," said Contestabile of his appointment.

"Tilting Point was built to help great developers seize this opportunity and Im really excited to join this excellent team."