Everyone agrees Supercell and GungHo are top grossing companies on iOS and Android, respectively 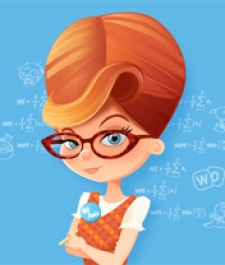 March 26th, 2013 - 12:30pm
By Jon Jordan, Contributing Editor
There are plenty of ways to rank the winners when it comes to mobile gaming.

We'd like to think our own PocketGamer.biz annual top 50 developers list is the most interesting, as it combines critical acclaim, creativity - both in terms of game design and business acumen - not to mention cold hard cash.

App store analytics company App Annie is more focused on the hard numbers it estimates from its analysis of the Apple App Store and Google Play, however

And it's just announced its global breakdown for February 2013

This sees Supercell crowned as the top grossing iOS publisher, behind GungHo Online and EA, with King.com and GREE rounding out the top 5. 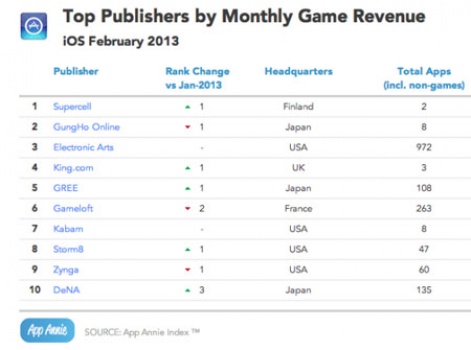 When it comes to Google Play, it's GungHo all the way thanks to the massive success of Puzzle & Dragons in Japan. 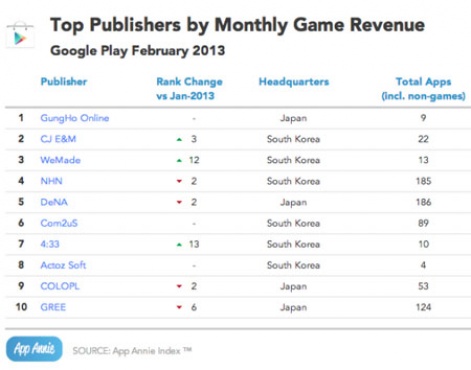 As for the games and companies generating the most downloads, tiny Imangi Studios did best on iOS and Google Play with Temple Run 2 being the popular game on both in February, and it was the most voluminous publisher on the App Store too.

EA - with dozens and dozens more available titles - was the most voluminous publisher on Google Play.

Of course, App Annie isn't the only company making these estimates.

If you're really into numbers, you can compare its February figures with those from rival Distimo.

In the case of Supercell and GungHo being top of iOS and Android, they both agree.