The title launched in December 2012, and used a smartBoost campaign to quickly ascend the German App Store charts. This in turn led to a high number of organic installs and a low effective CPI.

Trademob used eight suppliers to boost Wordblitz for Friends' ranking, pulling the title up to #7 in the German App Store's top overall apps chart within one day of launch.

The campaign generated 18,635 installs at a CPI of between 1 and 2. Then, with the game benefiting from increased visibility in the App Store charts, Wordblitz attracted a further 112,000 organic installs over the campaign period.

This, Trademob says, amounts to an effective CPI of less than 0.30. 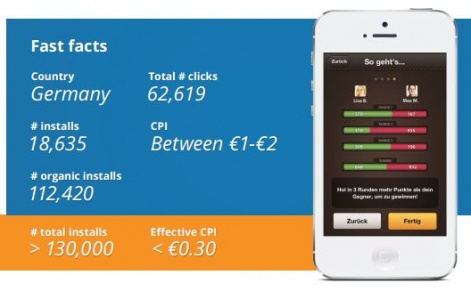 What's more, the game remained high in the charts for some time to come. Wordblitz stayed in the top 25 grossing charts and top 25 free downloads chart for four more weeks  including Christmas and New Year.

The full case study is available for free download from the Trademob website, where you can also find more information on smartBoost and the firm's other products.