Designed 'around people, not apps' 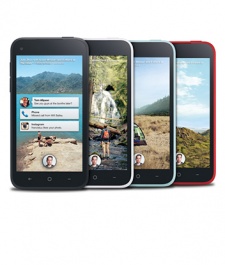 April 5th, 2013 - 12:39pm
By James Nouch, Staff Writer
Taking to the stage at the firm's HQ in California, Facebook CEO Mark Zuckerberg yesterday unveiled a new social skin for Android, designed to connect users with people, rather than apps.

Called Facebook Home, the software integrates deeply with Android, providing a visual overhaul that puts Facebook and its messaging services at the forefront of Google's mobile OS.

Interestingly, as well as being pre-installed on the long-rumoured 'Facebook phone' - now known as the HTC First - Home will also be available as a download to other high-end Android devices.

Apps, however, were notably absent from Facebook's presentation of its Android overhaul.

In fact, Zuckerberg explained that Facebook Home was designed "around people, not apps."

Notifications, for instance, are arranged by contacts rather than applications, and Facebook Home eschews the app and widget-filled home screens typically found on Android devices, placing the news feed front and centre instead.

Unlike Amazon, however, Facebook is not forking Android. Facebook Home may look substantially different from stock Android, but it's still Jelly Bean under the hood, and Google Play remains the default app store.

As such, it seems as though the gaming landscape on Google's OS will remain relatively unchanged for now.

But with Facebook promising monthly updates to Facebook Home, the possibility that the social giant may deploy its own App Center marketplace to drive Android app installs in a much more significant way  perhaps bypassing Google Play completely - is on the radar.

Home is also currently limited to Android devices, with a wider deployment on other more closed platforms - such as iOS, Windows Phone or BlackBerry 10 - seeming difficult, if not impossible.