April 29th, 2013 - 12:08pm
By James Nouch, Staff Writer
In a bid to defuse ongoing concerns over freemium apps targeted at children, Apple has moved to publish a guide to using in-app purchases on the front page of the App Store.

Currently on iPad only, said guide is triggered when users tap a 'Learn More About In-App Purchases' button in the Featured section of the App Store.

On offer is a brief, illustrated guide to the use of in-app purchases, with the guide defining what IAPs are, what types they can take and how they work, as well as information on the relevant parental controls.

Apple also includes links to its 'Parents' Guide to iTunes' and to an Apple support page titled 'iOS: Understanding Restrictions.' 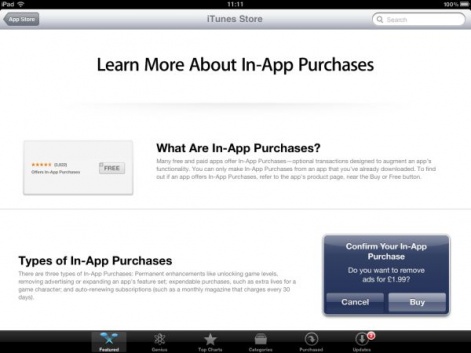 The attempt to educate iOS users arrives during a period of media interest in IAP and freemium, with recent reports highlighting instances where children had amassed bills as high as £1,700 within games many parents believed were completely free.

Said guide isn't the first sign that Apple is taking these reports seriously, either. March saw the company tweak the layout of App Store listings to include in-app purchase warnings, with educating its audience rather than fundamentally changing how IAPs work on Apple's agenda.