Set to integrate 'entertainment' into platform

June 6th, 2013 - 12:58pm
By Keith Andrew
Mobile messaging tool Tango is to move to integrate games and entertainment into its chat apps, unveiling a deal with publisher Gameloft designed to spearhead its assault.

The partnership  which Tango claims is the first of many  will see Gameloft launch exclusive games for the platform, though the exact form of the integration is currently unclear.

The first Gameloft title to be built into Tango's platform will be Candy Block Breaker for Tango for iOS, with a further deal with Sydney-based Bubble Gum Interactive  which is working on JetPack Jinx for Tango for iOS - also in the pipeline.

"The launch of our platform is a significant moment for Tango," said Tango co-founder and CEO Uri Raz.

"We have married messaging with entertainment, moving us closer to our goal of becoming a destination for family and friends. Using the platform, our members can move

"We're not only enabling all forms of communication, but promoting rich and meaningful interactions that enhance and drive engagement."

Tango's move follows a similar shift by the Asia-focused LINE messaging platform, which moved to build games into its platform last June  and with some success.

With 16 titles on board initially, games on LINE were able to amass a total of 100 million downloads within its first 9 months.

It's a shift that's transformed LINE into a major player in the social gaming scene across Asia, taking on the likes of GREE and DeNA in the process. 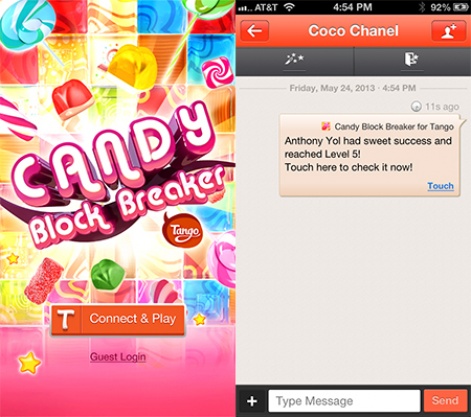 As a result, rival chat apps and mobile publishers no doubt see the opportunity to replicate that level of success in the west, with Californian outfit Tango seeing itself as leading the charge.

"Tango is rapidly growing and evolving to meet the needs of consumers," added Tango co-founder and CTO Eric Setton.

"We're a steadfast innovative engine, inspired by providing the ultimate communication experience for those who connect on our app. Partnering with entertainment is just the tip of the iceberg."