Value of quarterly activity in The Simpsons: Tapped Out estimated at $58 million

Game on the up with 5.4 million DAUs 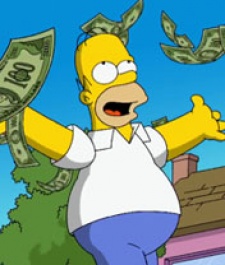 Revealing that The Simpsons: Tapped Out now has 5.4 million daily active players, Kim point out that was 'more than EA Mobile had across all its games in 2012'.

Indeed, as EA's Q1 financial filings reveal, the game generated more cash between April to June 2013 than at any time since it launched (technically relaunched) in October 2012.

"In the past quarter, it's generated 6 billion gameplay minutes, 1 billion quests, and players have spent more than 233 billion bucks," Kim added.

Bucks are the in-game soft currency, which players earn.

Alternatively, they can buy the hard currency - called donuts - and convert them. This give us the opportunity to perform some real rough back-of-ticket math.

Obviously, we can't say that the game is generating this amount of cash, merely that players' activity (if purchased) would be 'worth' $58 million.

Interestingly, this value fits within the known revenue range, given that EA has said The Simpsons: Tapped Out generated $23 million during its first quarter (back in 2012), and now it's making more money than ever.

EA's The Simpsons: Tapped Out makes $23 million in 3 months

EA Mobile continues free-to-play push with The Simpsons: Tapped Out