Exclusive: 78% of mobile gamers spending $50+ on IAP say they've received 'their money's worth'

August 19th, 2013 - 06:30pm
By Matthew Diener, US Correspondent
New research from market research firm EEDAR suggests that many perceptions about free-to-play gamers are wide of the mark.

The conclusion is that an overwhelming percentage of heavy spenders felt they were "getting their money's worth" with their purchases. 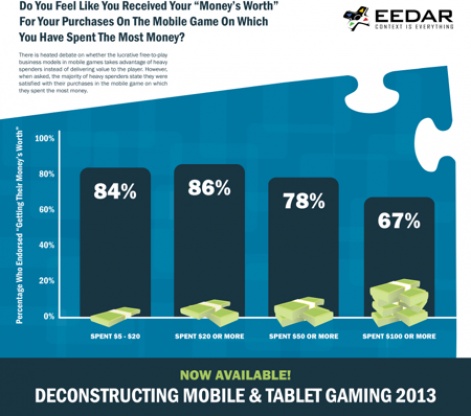 EEDAR's research also calls into question the role of consumer agency in the decision to make purchases.

Previously, there were some in the industry who felt that free-to-play games were 'Skinner boxes' that relied on the power of impulse purchases to trick players into availing themselves of IAPs.

But EEDAR found that these heavy spenders were very selective in determining which freemium games they spent on and weren't influenced by flashing lights and the desire to speed through just any game.

Rather, these heavy spenders were likely making a conscious decision on whether a game was good enough or not before they invested money in it.

Another point which EEDAR called into question was the conception of free-to-play gamers and console gamers as two separate gaming groups.

Thus, while a $50 in-app purchase might not deliver the same amount of content as a $50 triple-A console game, heavy mobile spenders recognize - and enjoy - the value of both.

Bringing it all together

Speaking on the data points collected during the study, EEDAR's senior analyst Patrick Walker lays out exactly where detreactors are mistaken with its impressions of free-to-play gamers.

"Critics of the free-to play-business model state that the model takes advantage of heavy spenders by leveraging impulsive buying behaviors rather than providing true gameplay value," he says.

"However, when asked, the majority of heavy spenders endorse that they are satisfied with the purchases made in the mobile games on which they spend the most money.

"In addition, these heavy mobile spenders play on a broad variety of platforms, including consoles, and understand the value proposition supplied across different business models, and still choose to purchase microtransactions."

Those interested in reading the study in full, or learning more about EEDAR, can do so by visiting its website.

Reply
Gunnar Lott
Another small thing: 31 percent of interviewees were drawn from Candy Crush and Clash of Clans -- both very good games. And popular, very popular.

The results might have looked worse with other games.

Reply
Patrick Walker Senior Analyst at EEDAR
I absolutely agree that time matters. We framed the question to target people that had already churned. The interesting question to me is whether people are satisfied after they have left their experience because this informs whether they will return go another game and spend just as much.
Posted 8 years, 2 months ago

Reply
Robert Green
"My expectation is that satisfaction would correlate heavily with metacritic score."

I fully agree. And previous EEDAR research shows that review scores correlate very strongly with sales in the console market. If we combine that with the fairly reasonable assumption that those people who spend a lot on gaming are more likely to read those reviews, it suggests a situation where the people who spend the most on console gaming get the most satisfaction, right?
Which is in direct contrast to what we see in the above graph, where more money spent equates to less satisfaction, or at very least diminishing returns.

"My expectation was that people spending so much money and lacking closure (whats the end-game pay off in most F2P experiences?) would feel like they did not get their money's worth."

I think this varies hugely with WHEN you ask the question. If these games really are addictive, and really do play on human psychology, then it would be perfectly reasonable to expect that at some point, people would realise it and vow to quit, considering their time and money to be wasted (google "candy crush addict" for many stories about this). But crucially, before that point, like the gambler at the slot machine, they would likely tell you that everything was great. Wouldn't you agree?
Posted 8 years, 2 months ago

Reply
Patrick Walker Senior Analyst at EEDAR
And it would be interesting to compare this to a sample of gamers that had spent $60 on a AAA game. My expectation is that satisfaction would correlate heavily with metacritic score.
Posted 8 years, 2 months ago

Reply
Patrick Walker Senior Analyst at EEDAR
But I think the broader point is that if someone is saying that they feel like their money was well spent why is it the role of someone else to tell them that it wasn't.

I actually wrote that question into the survey expecting a different result. My expectation was that people spending so much money and lacking closure (whats the end-game pay off in most F2P experiences?) would feel like they did not get their money's worth.
Posted 8 years, 2 months ago

Reply
Patrick Walker Senior Analyst at EEDAR
Actually, I think "buyer's remorse" is just as common a behavior/psychological principle as searching for information to justify your purchase.
Posted 8 years, 2 months ago

Reply
Robert Green
Well that sounds a lot more reliable then.
I'm curious though Jon, do you agree with what seems to be the assumption underlying this question - that if these games were just skinner boxes, then the people who paid money into them would all feel like they were ripped off?
Isn't this like trying to find out if slot machines are good value for money only by asking recent gamblers or people still sitting at the machines?
Posted 8 years, 2 months ago

Reply
jon jordan
Robert - I believe the survey was of 3,000 paying players
Posted 8 years, 2 months ago

Reply
Robert Green
I'm inclined to agree with Alex. The idea that we can simply take their word for it flies in the face of almost every kind of exploitative behaviour. Or, to give a less hostile example, notice how many people will look for positive reviews of a product online after they've already bought it - people will rarely admit that they threw money away on anything, and are even less likely to admit to being conned.
The other interesting point not covered here is that the graph above is trending down. Put another bar at 100% for the non-payers (who must have gotten their money's worth, by definition) and it looks like there's an inverse relationship between the amount spent and the feeling of value. Considering the F2P industry's mantra that they're simply allowing their biggest fans to pay more for the games they love, one should not expect the highest payers to feel less satisfied than those who paid less, and it most certainly doesn't support his conclusions.
To put it another way, if you're making a product where over 95% of people who try it don't pay, and 1/3 of your biggest customers didn't feel like they got their money's worth, even after you let them try it for free, is that something to crow about?

Also on that note - the article says they surveyed 3,000 gamers. Given the expected conversion rates, wouldn't that actually make for a very small sample size of payers?
Posted 8 years, 2 months ago

Reply
Alex Kunzelmann
We could be looking at spend justification here. Let's study the opinions of a sample of all gamers instead.
Posted 8 years, 2 months ago