Chart of the Week: Smartphone games headed for 80% penetration

Almost everyone will be playing them by 2016

September 10th, 2013 - 02:49pm
By Keith Andrew
If you thought everyone, from your Gran to your postman, was already regularly taking on Angry Birds and co., you ain't seen nothing yet.

A new report by mobile ad specialist MediaBrix citing eMarketer figures predicts that 8 out of every 10 smartphone owners in the US will soon be playing mobile games, with the mobile market already the driving force behind a surge in social gaming.

"Mobile gaming audiences have been increasing more rapidly than other gaming sectors and are poised for continued growth," details the report.

"US mobile gamers surpassed online casual gamers in 2012 and will remain the largest audience segment through at least 2014."

By 2014, 144 million Americans will be playing mobile games  up from the near 126 million currently sampling their delights. Skip forward another two years and that figure will have risen further, accounting for 80 percent of smartphone owners. 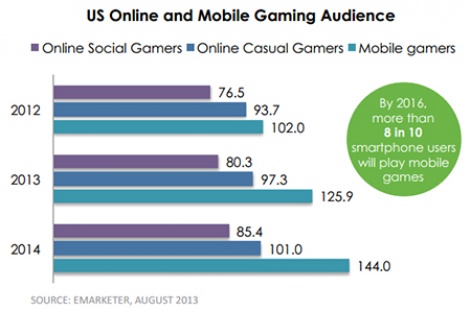 MediaBrix gets into the real rewards sector, launching Rewards