September 27th, 2013 - 04:36pm
By Wesley Copeland
In what may prove to be the firm's last ever publicly released financial figures, BlackBerry (BBRY) has posted a $965 million loss in its latest quarter, with revenues also falling by 45 percent year on year.

The Q4 loss  based on GAAP accounting standards  comes off the back of shipments of just 3.7 million smartphones, with the company acknowledging that most of said units were BlackBerry 7 devices.

Indeed, the Canadian firm suggests that the majority of BB10 phones shipped to retail are yet to be sold and will show up in future quarters.

The firm notes that 5.9 million smartphones were actually sold to consumers across the quarter, but notes that this was actually the result of retail clearing old stock, with the figure including "shipments made prior to the second quarter."

Little surprise, then, that revenue dropped to $1.6 billion, down from $2.9 billion during the same period last year.

"We are very disappointed with our operational and financial results this quarter and have announced a series of major changes to address the competitive hardware environment and our cost structure," detailed president and CEO Thorsten Heins.

"We understand how some of the activities we are going through create uncertainty, but we remain a financially strong company with $2.6 billion in cash and no debt.

"We are focused on our targeted markets, and are committed to completing our transition quickly in order to establish a more focused and efficient company."

The company's current woes are largely down to its decision to bet the farm on BlackBerry 10  its answer to iOS  and associated devices, such as the touchscreen-only Z10.

Sales of the Z10 appear to have been slow to non-existent, with BlackBerry having already revealed it's been forced into a write down of nearly $1 billion in unsold inventory. 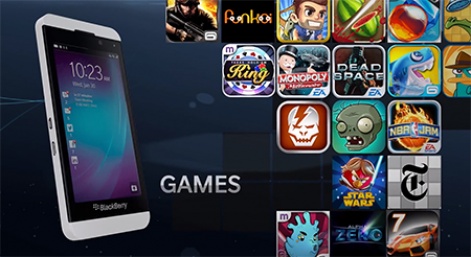 BlackBerry's Z10 made games its focus

To put BlackBerry's losses in context, rival Nokia - though now back in profit - posted a smaller loss of around $755 million back in October 2012, resulting in analysts on Wall Street labelling the firm's stock as 'junk' and writing off the company's chances of a comeback.

The Finnish company is now embarking on a takeover by its strategic partner Microsoft.

Similarly, BlackBerry will be hoping the proposed $4.7 billion buyout by leading shareholder Fairfax gives the company the time it needs to find its feet, with the firm having already announced it's pulling out of the consumer market to focus on enterprise.