Ubisoft sell off was 'difficult', admits Future Games of London

But French publisher is the perfect partner

October 2nd, 2013 - 09:44am
By Keith Andrew
UK studio Future Games of London has admitted its decision to sell up to publisher Ubisoft was a "difficult one", but one the firm ultimately took to help it "place bigger bets on better games."

The company has detailed the reasons behind the move on a new FAQ section on its website, with the developer currently turning down direct interviews with the media.

However, in the answers laid out on the website, Future Games of London admits the fact it had "built so much success as an independent company, with our own IP and a direct relationship with our players" made selling up a difficult decision to take.

"Being part of Ubisoft's family gives us the support, experience, marketing and resources we need to make a very big impact with our future titles," the developer adds on its site.

"We have known the senior team at Ubisoft for a while now. They're fans of our games and we've kept in touch over the years. We feel there is a genuine fit between the culture of both companies. We all love games and are passionate about delivering the best entertainment experiences possible."

Future Games of London goes on to claim that it is "confident that Ubisoft will allow us to retain much of our autonomy, process and culture."

"We get the chance to repeat and improve on what has made us successful, while having 8,000 new friends to help and provide advice whenever we need it," adds the studio, claiming there will be "no change" to its existing games.

"We have a new game entering soft-launch soon and exciting releases due from the Hungry Shark series," Future Games of London concludes.

"Future Games of London will operate in almost exactly the same way as before. From a team perspective, the studio is currently just over 40 people. Two or three more people are due to join us before the end of the year.

"During 2014 we'll grow a little more, but not much. We want to stay focused and agile." 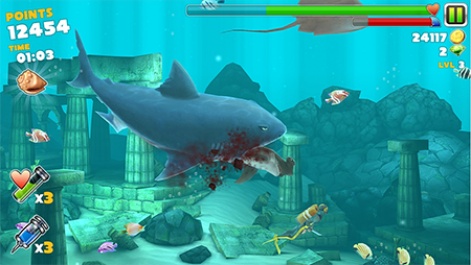 Ubisoft's acquisition of the studio comes just days after it picked up Finnish developer Digital Chocolate's Barcelona studio, signalling a ramping up of the French publisher's operations on smartphones.