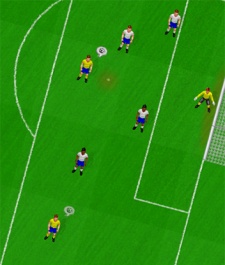 With an intention to grow the game's presence in overseas markets, Thumbstar Games has announced it has successfully added the Android version of indie hit New Star Soccerto it's expanding portfolio of titles.

The publisher claims the rolling out of a major update to the iOS version  and the pending switch to the free-to-play model on Android  will enable it to build on existing momentum and push New Star Soccer to fresh heights.

As such, publishing the game worldwide on Google Play and Amazon's Appstore for Android is a vital component in Thumbstar's intention to reach a new, more global audience, with the markets of Asia and Latin America specific targets.

"We are absolutely thrilled to be working with Simon Read on this brilliant game and look forward to taking it to new heights," said Gareth Edmondson, CEO at Thumbstar.

"The story behind New Star Soccer is inspiring and we feel very privileged to be involved in the next chapter."

Despite the game's undoubted success in the UK, its lack of presence overseas is something creator Simon Read revealed to us during our recent New Star Games studio profile.

"We've put in Chinese, Japanese and Korean languages in the latest update," Read told us.

"Obviously there's huge potential there, so that's one area that we're trying to reach. But generally nowhere outside the UK has been as successful as it could have been, I don't think.

"European countries obviously love their football; Italy has taken to it really well, Turkey is probably one of the highest countries in terms of downloads and revenue, but then there are other countries like Germany, Holland, these kind of places where it really hasn't picked up at all."

Indeed, it seems logical an intention to expand New Star Soccer's global standing is what led Read to UK publishing outfit Thumbstar in the first place.

"I'm really looking forward to working with Thumbstar and can't wait to see what that can do for New Star Soccer on Android," said Read.

"I'm sure this is the start of a fantastic relationship"