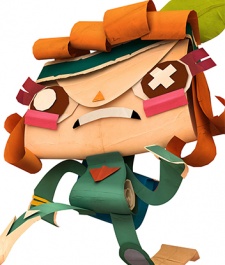 Media Molecule's Vita-exclusive platformer Tearawayhas dominated the nominations for this years GDC Awards, picking up five of the eight categories on offer.

Despite not setting tills ringing at quite the rate Sony had hoped, the critically-acclaimed release is up for Best Handheld/Mobile Game, the Innovation Award, Best Visual Art, Best Audio, and Best Technology.

Tearaway also only just missed a nomination for the Game of the Year category, receiving an honourable mention instead.

Elsewhere in the awards, Nintendo's The Legend of Zelda: A Link Between Worlds has been nominated for Best Handheld/Mobile Game and Best Design, with the 3DS release too receiving an honourable mention for the Game of the Year category.