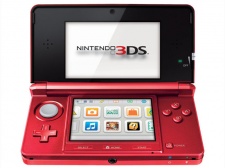 Nintendo has claimed 2013 was a record year for 3DS, with the Japanese giant branding the handheld a "powerhouse" as game sales jumped by more than 45 percent.

More than 16 million combined packaged and digital Nintendo 3DS games were sold in 2013, with lifetime hardware sales of hitting 11.5 million in the US alone.

I got the power

"Nintendo 3DS is a powerhouse with games and experiences that appeal to all kinds of players," said Scott Moffitt, Nintendo of America's executive vice president of sales and marketing.

"We're not slowing down in 2014. With more games featuring fan-favorite franchises on the way, the best days of Nintendo 3DS are still to come."

Nintendo neglected to publish global hardware sales for the system, though Chart-Track has already confirmed to games retail trade site MCV that 3DS was the best selling console in the UK in 2013.

Estimates suggest around 42 million units have been sold worldwide since 3DS's launch in 2011, well ahead of Sony's PS Vita on little over 7 million.