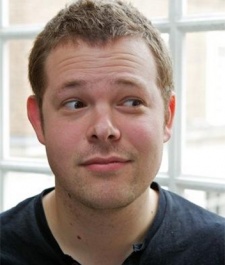 Die Hard may just be the greatest movie in cinematic history. Don't believe me? You don't have to. It's not my opinion.

Instead, take Mike Bithell to task next time you bump into him at a games convention or on Twitter. If you're so inclined.

During the opening presentation of the Indie Rock Stars track here at the inaugural Pocket Gamer Connects global games conference, the charismatic creator of Thomas Was Alone identified John McTiernan's Die Hard as an ideal resource for a game maker.

As a rule, we laugh at developers who try to create games in the style of cinema. Many believe game designers arent' quite ready for this yet. Game makers need to focus on making the Die Hard of games, not the Citizen Kane of games.

In a traditional Hollywood feature, characters undergo changes. Quite often, they're symbolic transformations.

Protagonist encounters conflict. Protagonist finds resolution. There's a clear character and narrative arc. Game developers sometimes get it wrong in this respect. Narrative is in conflict with action.

In contrast to the world of motion pictures, actions can - and should - speak volumes in terms of character development in game making.

Silence can be golden in a video game experience. Take Gordon Freeman in Half-Life, for instance. His weapon is his voice.

By way of example, John McClane is terrified and vulnerable at the beginning of the first Die Hard. Contrast that with his demeanour and behaviour during the denouement. Chalk and cheese.

Architecture - in the physical sense of the word - should be afforded more importance in game development.

In Die Hard, the location is established early on. Its significance couldn't be telegraphed more clearly.

We learn about the Die Hard characters through their interaction with the surrounding space and environment.

In that respect, the director tells a story through the physical structure itself. Looking back, the Nakatomi Plaza is almost as iconic as McClane's "yippee-ki-yay" chant.

Rather interestingly, some have observed that the Die Hard characters only walk through 'traditional' doorways and up lifts on a couple of occasions. They spend most of their time creeping through air vents, hiding under tables, finding cover.

It's like an early freerunning experiment. The story is reaffirmed through the world itself. McClane's movement defines McClane.

In Die Hard, McTiernan uses the environment for landmarking. Locations serve as callbacks to help a viewer's understanding of space and jog his memory. Game devs can learn from this.

In conclusion, game characters don't have to change during the course of a story. Games don't necessarily need stories, in fact.

Game makers need not be constrained by the traditional architecture of a film. Or go anywhere near a skyscraper in Los Angeles on Christmas Eve. Give me a call about this. If you have a moment, pls.

Reply
Mike Bithell
Hey Richard, why all the made up quotes?
Posted 6 years, 10 months ago