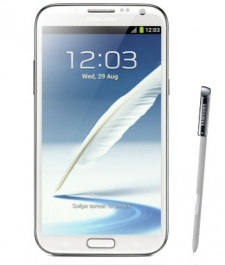 New data from Juniper Research suggests that the phablets will cast a big shadow in 2014.

The crossover devices, which bridge the gap between smartphones and tablets, are expected to ship 120 million units globally in 2014. This is up significantly from the 20 million shipped in 2013.

Many in the market expected phablets to wane in popularity given the penetration of inexpensive, 7-inch tablets but Samsung's Galaxy Note line has slowly won over consumers since its launch in 2011.

Whats in a name?

It's worth noting that 'phablet' is a loose term that can be applied to any device with a screen larger than the smartphone-standard 3.5 or 4-inch.

For purposes of its data, however, Juniper Research required that a device have a minimum screen size of 5.6 inches to be considered a phablet.

Also worth noting is the fact that Apple does not have a strict phablet-class device in its line-up. While it's increased the size of the iPhone's screen between the 4S and 5 lines, it has yet to introduce a large-screen smartphone to rival Samsung's Note line.

Will Apple's next big innovation wipe away the memory of iPhone 5C?