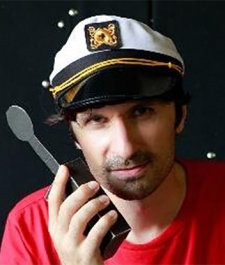 Co-operative party game Spaceteam has picked up the third annual GameCity Prize, with developer Sleeping Beast Games picking up the award at this week's GameCity Nights in Nottingham.

The award celebrates videogames as a cultural art form, with previous winners including thatgamecompany for Journey last year and Mojang for Minecraft back in 2012.

Spaceteam, which hit iOS and Android, charges up to four players with braking commands at each other in the hope that a teammate will respond in time to hold the ship together, all the while trying to outrun a star that's going supernova.

Henry Smith, the creator of Spaceteam and formerly a programmer for BioWare told the audience that he was "extremely honoured and also humbled" to pick up the prize.

"I'm a strong supporter of diversity and accessibility in video games so I'm really glad these things are being celebrated," he added.

The panel of judges was made up of professionals working in acting, art, broadcasting, education and journalism; each being tasked to select the release they would show to someone who had never taken on a game before.

This year's shortlist included home console heavyweights The Last of Us, FIFA 13 and XCOM: Enemy Unknown, with further competition from popular indie titles FTL, Sound Shapes and Thomas Was Alone.

"This was one of the most exciting and diverse shortlists that we've had to date. Spaceteam is a great example of a title that pushes the boundaries of what interactive entertainment can be," added Iain Simons, GameCity festival director.

Further details on Spaceteam can be found on Sleeping Beast Games' website. More information on the prize, jury and other games on the shortlist can be found on the GameCity Prize homepage.