But is it a scam? 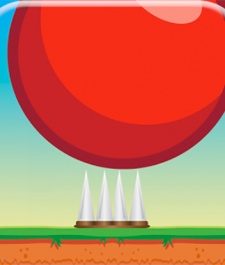 Just as the furore surrounding the meteoric rise of Nguyen Ha Dong aforementioned chart topper appeared to be dying down, now attention has turned to the somewhat suspicious overnight success of another title.

Red Bouncing Ball Spikes is currently the third most downloaded paid app on the App Store in the US, with the game - based on a simple template designed for game creation tool GameSalad - having also broken into the UK top 30.

So, what's the problem? Like Flappy Bird before it, people are questioning whether the game's rise  more than a year post launch and seemingly out of nowhere  is genuine, or if foul play is involved.

Theories as to just how Red Bouncing Ball Spikes has found itself near the summit of the US charts are patchy and varied.

Sister site Pocket Gamer emailed the game's developer Louis Leidenfrost for his take on how the game shot up the App Store rankings. "I don't want to give my advertisement strategies away," he offered in reply.

Users on GameSalad's forums, however, have suggested that Leidenfrost is actually a pseudonym.

They suggest that Leidenfrost is in fact a name used another developer called Mateen Pekan who has previously been banned from GameSalad's forums accused of being a "scammer".

"Mateen Pekan is a known scammer, and not just in the GameSalad world," said one GameSalad user of the alleged Red Bouncing Ball Spikes developer back in March 2013.

"I think the only reason he is able to get away with it is because he is under 18 and people have difficulty suing him. He is based out of Canada."

Indeed, while on GameSalad the game's developer is listed as Louis Leidenfrost and on the App Store the game is published by Frosty Games, the Android version of Red Bouncing Ball Spikes is listed under Mateen Pekan's name.

Just how the developer, whoever it may be, has managed to manipulate the App Store in order to score a top three ranking is up in the air, though others have claimed its success may be entirely innocent, coming on the back of an unannounced change to Apple's ranking algorithm.

Either way, the fact the 99c/69p release has managed to surge up the charts with gameplay almost entirely lifted from a $10 template (see below) was always likely to garner attention, and focus on the game's chart performance will continue unabated over the next few days.