Teams up with Factory Entertainment 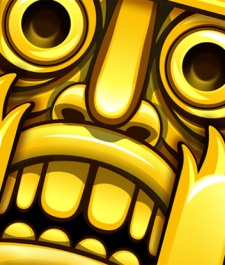 With combined downloads of Temple Run and its follow up having hit the 500 million mark, Imangi Studios has unveiled plans to launch plush toys "based on the series' cast of characters."

The new toys will be manufactured by "pop culture experts" Factory Entertainment, with Demon Monkeys and Temple Idols toys hitting retail in an initial run this autumn.

Running away with it

In addition, the studio has also lifted the lid on a deal with Basic Fun to produce the first Temple Run handheld LCD game, packing play into a "durable device with a Carabiner-style clip" and retailing for $9.99.

"Our work with Factory Entertainment and Basic Fun will connect Temple Run fans to the characters and stories they have interacted with for the last three years," said Keith Shepherd, co-founder of Imangi Studios.

Factory Entertainment and Basic Fun will be exhibiting their Temple Run tie-ins at the 111th American International Toy Fair, running in New York between 16-19 February.