Why it's good to let gamers keep an eye on you 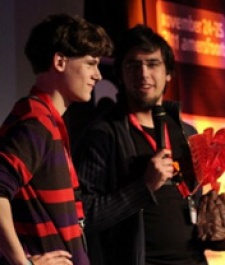 "I recommend having people watch you while you're working," said Vlambeer's Jan Willem Nijman during the studio's talk on Performative Game Development at GDC 2014 in San Francisco.

"It's super productive. You can't check your Facebook feed or Twitter or anything because everyone is watching."

By people, Nijman meant gamers. That's what Performative Game Development  the phrased coined by Vlambeer  represents: game development almost as entertainment, where customers not only pay to play your game early, but also actively view and contribute to the development process.

It's a strategy Vlambeer put into action with the development of Nuclear Throne, using both Twitch and Steam Early Access to engage with the studio's community.

"We went to Twitch and we asked if we could broadcast the development of Nuclear Throne on their platform, and they said 'yeah'," opened fellow Vlambeer man Rami Ismail.

"Then we asked if we could have a spot on the front page, and they were like 'yeah, as long as you broadcast regularly'. So we said, 'how about every Tuesday and Thursday afternoon from 1pm to 5pm?', and they said 'yeah'."

As Ismail pointed out, however, broadcasting the development of a game means more than simply pointing the camera at a member of the team while they type. It's a form of entertainment.

Just as difficult was Vlambeer's decision to put the game on Steam Early Access, with Valve asking for regular builds in order to comply.

"So we said, 'how about every Saturday?', and they went for it," continued Ismail. "That's the second time we've suggested something as a joke and the people who we've suggested it to have taken us up on it."

I've got my eye on you

But why would a developer want to open themselves up to the eyes  and, more importantly, the scrutiny  of gamers before a game has even been released?

"Games are made to be played, and this is happening throughout development [with Nuclear Throne]," added Nijman.

"It's weird that it hasn't always been this way. It's super motivating."

As Ismail added, it also helps translate the process of development to gamers, which is beneficial to the relationship between game makers and game players.

"People are always surprised when they find out something like you have to program in a bullet hitting a wall, for instance. They're like, 'what, you don't just label it bullet'?"

Over the course of Nuclear Throne's 38 week history, Vlambeer has made 38 builds and released 19 early access updates. It's a taxing process, but it has its benefits.

"One of the best things that can happen with a game is when people who have nothing to do with its development start figuring out everything about it and telling other people," Nijman said of the Nuclear Throne Wiki that sprung up.

But it's a two way relationship, and key to building the trust and support of the game's audience is an ability to be honest and acknowledge bugs and mistakes.

Even if you can't fix them immediately, Vlambeer stated, simply engaging with the community over such issues can pay dividends.

"But for us, developing and marketing is the same thing right now, which is brilliant, and it helps us educate gamers, and that's sort of amazing. It might be about time to demystify game development a little bit."