And you're invited too 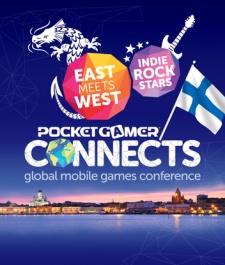 If you're a regular PocketGamer.biz vistor, chances are you'll have spotted our articles on our upcoming Pocket Gamer Connects conference in Helsinki on 16-17 June 16-17. It's not just going to be epic and essential, but it's going to be a hell of a lot of fun.

As planning for PG Connects has come together, we've taken a small step back to see how the event horizon is looking, and we've got to say it's a very fine view. So fine, we needed to share it.

As you know, this second PG Connects show takes place in Finland, so naturally a lot of our emphasis in planning the event has been on the Nordic region. There's a whole track within the two-day game creation extravaganza set aside to celebrate Nordic game development, and everyone who's anyone in this burgeoning territory is coming along.

Although it's by no means a definitive list of attendees (the internet might run out of pixels if we printed that tome here), PG Connects is being fully supported by the breadth of talent that runs in Finnish circles.

The local wing of the IGDA, for example, is coming along, and that's a mighty resource for anyone involved in the games industry, whether local, global, big or small. Making yourself known to industry associations is always good advice, so this will be a great opportunity to find out how you and your studio can get more involved in the core trade.

This puts you shoulder-to-shoulder with some of the other attendees of PG Connects that are also local to the big show, such as Rovio Entertainment, Gameloft, EA, Kongregate, Microsoft and Supercell. These guys alone are responsible for massive amounts of the mobile games market, so there's a lot to be learned at discourse here for anyone who's hoping to make even the slightest wave in the smartphone world.

You've also got Ubisoft to talk to, as its multi-platform RedLynx studio – which has put out more than 100 games in the last 10 years – is coming along to mingle, not to mention Max Payne and Alan Wake creator Remedy Entertainment. And let's not overlook local studios Frogmind and Cornfox.

This is all just within Finland, and they're only a fraction of the local studios and companies that have already signed up for PG Connects. What surprised us as the attendance list began to take shape is that the event evidently isn't being viewed as a Nordic gathering. It's become global, and just as relevant to game creators from across Europe, the Far East, the US and everywhere.

From the 30-plus countries that are sending game dev delegates you can look forward to meeting Tencent, Shanda Games, Spellgun, Hitcents and Chukong Technologies that are flying in from China; Gamevil and CJ Entertainment are representing Korea; Vivid Games is coming in from Poland; Outplay, TAG Games, Space Ape Games, Sumo Digital, Tin Man Games, Tower Games and Channel 4 will be waving the British flag; and Digital Legends and NAFNA are coming in from Spain

Japan's own DeNA, Worker Bee, MetAps and NTT Docomo are on their way; Mag Interactive and Paradox are nipping over from Sweden; Crobo and Deep Silver Fishlabs are coming from Germany; 99 Games and Dhruva will be in from India; G5 Entertainment is visiting from Ukraine; we've got Biodroid from Portugal; Holland's Vlambeer is joining the party; i-Free and MobiGear are representing Russia, and you've a host of studios with a global presence all of their own like King, Kabam, Rising Star Games and so many others.

You won't just be talking to other game makers either. There's a lot to learn at events like PG Connects, as companies like platform creator Unity are coming along so you can find out about what's coming in the technical world of game development, or you can talk to the powerhouse marketing team from AppLift about how to get your products seen, downloaded and played.

Even Samsung is sending a contingent from the US so you can find out more about the hardware your games will be running on, Amazon and Facebook will be there for platform discussions. Gaps in your business skills can easily be filled by the kind of people we're gathering together in Helsinki this June.

The truth of the matter is quite simple. This post is meant as advice for industry members, and isn't a ticket sales pitch. Events like PG Connects might be patronised by huge companies with a massive amount of industry clout, but they're all run by people just like you. Gamers, nerds, drinkers, socialisers all.

If you want to get your games played, and want to become a recognised part of the global industry, then get to know those who are already doing it. And not over email or Facebook or Skype. Do it face-to-face, over a drink, when no one has to rush off to the next meeting, or to catch a train. It's how games world works and grows.

Pocket Gamer Connects has been designed for this purpose, so open yourself up to these massive possibilities (and many others that haven't even occurred to you yet) by coming along and taking part.