The origins of a mobile superstar 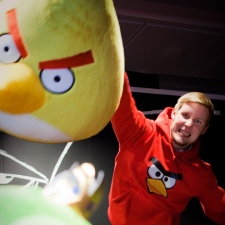 The story of Angry Birds and developer Rovio truly is an undeniably remarkable one.

The Finnish studio took a single mobile title and turned it into one of the industry's biggest franchises, helping mobile gaming establish itself in the process.

Every saga has a beginning though, and during a friendly 'fireside chat' at PG Connects in Helsinki Rovio's Niklas Hed explained that the franchise was built on a bed of honest mistakes, unforseen epiphanies, and lots of hard work.

“We started off with casual gaming, and playing with the idea of a multiplayer game, but even then it was super casual,” explained Hed.

"We learnt that you can put a lot of content into a small package, and we began to understand that great content could be compressed into a very small space.”

Mistakes, according to Hed, make games better, and Angry Birds was actually shaped by some of Rovio's earliest slip ups.

“We had a beta where a lot of mistakes became apparent, and although we'd been making games for mobile for years, the touch screen control required different designs,” said Hed.

“Angry Birds itself started from one image, and we didn't have a proper game at that time but the whole energy in that picture was fascinating.

“When we finally started developing Angry Birds and we took our time, we polished the game a lot, and we put all of our effort into it.”

As we know, that one image would eventually spawn a franchise of unbelievably successful games, but how did Angry Birds evolve from a small passion project into a mobile superstar?

“It was fully organic. We launched it in December 2009 and it took six months to reach the top of the US charts,” said Hed.

"Initial feedback told us that people actually wanted more content. That was strange, but we decided to add more and forge a relationship with the fans in the process. Having a dialogue with them really helped."

Ultimately, Hed believes that hard work coupled with a desire to keep on innovating drove Rovio to the top of the pile, and will continue to urge the developer forward in the future.

“It's all about hard work, great products and fantastic services,” concluded Hed. "Of course, we have to be humble because the market is changing so rapidly, and we have to stay hungry. Hard work, desire, and a will to surprise our fans keeps us going.”

Rovio: Most games for our publishing label are 'found at conferences'