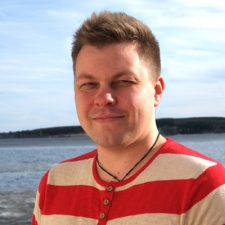 "I'm surprised so many people made it to the end," said Cornfox & Bros. creative director Heikki Repo candidly of his action RPG Oceanhorn during his presentation at Pocket Gamer Connects in Helsinki.

"I've had some feedback today about that actually – the fact that people made it to the end makes a game designer a very happy man."

Oceanhorn may have been a big game for mobile – 15 hours of playtime on board – but it was made primarily by a team of three, meaning Repo now has experience aplenty on how an indie can reach the top of the App Store. Experience he was eager to pass on.

"In the beginning we just wanted to make a game that was missing from the App Store," he opened. "When I got my first iPhone 3GS, I was searching for a console style RPG adventure, and they were missing from the marketplace. I'm a big fan of JRPGs, and I really wanted players to have that kind of experience. This was a project where we could realise our childhood dreams."

Out of the box

But Oceanhorn did more than simply tick the creative boxes of Cornfox & Bros. It also amassed downloads aplenty.

"Because we were a small team, we needed to maximise our efforts so far, so we created a 3D tile engine called Roc, and we made all the levels this way," he continued.

"It was fun to work with – you could make levels on your sofa, or in an aeroplane, or on the bus on the way to work. Our editor enabled us to create a much bigger game than we would have been able to otherwise."

Not that the game didn't encounter plenty of stumbling blocks during developer. Oceanhorn was originally meant to be an open world game, but the "concept failed miserably" because "players never found their way into the game."

"It just didn't work for us," he added. "Linear progression enabled us to control the information the player gets and difficult levels of course. We did keep some of the open world elements in the levels, but I'm not sure if that was such a good idea – we did get some feedback about it. [Laughs]."

The key to actually game the size of Oceanhorn out, Repo added, is to focus on the most essential elements.

"When we were unsure as to whether we could make the game we wanted to make, we started to focus on the features that would have the biggest impact on Oceanhorn – [you want to] leap towards the final goal rather than small steps," he said.

"I wanted art assets I could use throughout the game because it was still a huge task doing such a big game. If you're willing to sacrifice some of the details and the fine tuning, you'll end up with a finished game."

Repo added that Cornfox had to accept that a developer staffed by three regulars simply "can't compete with Final Fantasy" in terms of scale, even though it's the kind of audience the studio was aiming the game at.

"When it gets to the crunching stage, those who stuck their fingers in many pies are going to be very busy," he joked.

The end result was a game made up of 500 environment assets, 36 characters with unique animations, 12,000 words in the story, 35 individual pieces of music and, most importantly of all, more than 1 million players.

But, despite such big numbers, Repo attributes much of the game's success to the ability to translate the most important elements of Oceanhorn's gameplay via one screenshot.

"It was very easy to see what the game was about in one single screenshot," he concluded. "We will try to make games in the future where people know what kind of experience they will have from one single shot."