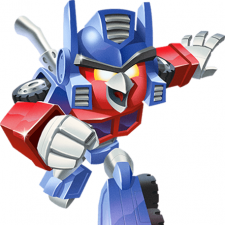 If you were at Pocket Gamer Connects: Helsinki this week, you'll have heard first hand from Rovio's leaders how important brand building has become for indie game studios.

Indeed, as if to emphasise the point, said conference sessions were presented in the wake of another Angry Birds deal that's looking to spawn more than just mobile games, Angry Birds Transformers.

The Finnish developer giant is linking up with Hasbro are to launch a whole range of licensed products based around an Angry Birds and Transformers mash-up, much like the Star Wars deal that came before it.

"Angry Birds Transformers provides fans worldwide with a fun, new story and characters, and innovative ways, like our TELEPODS platform, for consumers to engage with the brand,” says John Frascotti, CMO at Hasbro.

"We collaborated with Rovio to create opportunities for kids and families to experience Autobirds and Deceptihogs across multiple formats and entertainment platforms, for a completely immersive branded experience."

As such, smartphone games look like they're on the cards, naturally, but this is also likely to hit the living room consoles, desktop computers and tablets. And that's just the games.

A toy range and other established Angry Birds products are also expected to flood the merchandising highways, including Transformers-branded TELEPODS; small toy figures that can interact, to a small degree, with the touchscreen games.

“We’re really excited to combine the iconic Transformers universe with the quirky world of Angry Birds,” adds Blanca Juti, Chief Marketing Officer of Rovio. “This mash-up is going to appeal to those who grew up with the brand in the 80s, as well as fans of the brand today. People are going to love it!”

There's an official placeholder website already live, and if you want to find out more about Rovio Entertainment's epic grasp on effective licensing, check out their talks held at this year's Pocket Gamer Connects event.