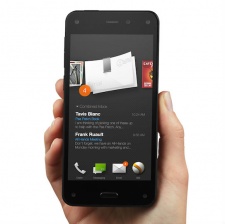 Continuing its trajectory of releasing low cost devices to boost longterm sales from its best customers, Amazon has announced its phone - Fire.

The 4.7-inch forked-Android device has a Qualcomm 2.2GHz quad-core Snapdragon 800 chip with Adreno 330 graphics and a 13MP rear-facing camera.

Purchasers will also get free membership to Amazon's Prime free one-day delivery service for a year. This is key for Amazon as it generates very high levels of sales from its Prime users.

The innovation in the Fire phone, however, are the four front-facing infra-red cameras which track a user’s head orientation and generate an on-screen 3D effect.

While this might be something of a gimmick, Amazon hopes that as well as obvious applications like mapping and viewing retail items, this 3D effect - which Amazon calls the Dynamic Perspective - will also be a general benefit in terms of all aspects of the user interface including basic menus.

For example, you’ll be able to scroll through web pages by tilting the phone.

There will be an SDK that developers can support to take advantage of the effect in their apps, with Amazon CEO Jeff Bezos showing off Angry Tofu - a 3D version of HotGen's 2011 iOS game To-Fu: The Trials of Chi.

Amazon also highlighted its Firefly service, which enables users to identify real-world objects using the phone’s cameras and buy them immediately, as well as linking web searches to products and making it easy to identify and purchase digital items.

Amazon says Firefly has 100 million products in its database.

In terms of pricing, Fire phone will be available from AT&T, priced $199 on a two-year contract from 25 July.

Developers can find out more from the Amazon developers site

Amazon gets into Christmas spirit with $220 app and games giveaway