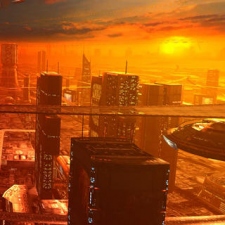 Helsinki, Finland. A city of 24 hour daylight, overpriced Moomin merchandise, and - earlier this week - some 50-odd developers eager to show off their new game.

That's right, we held our most recent Very Big Indie Pitch - sponsored by Immersion, Samsung, SkyMobi and Vserv - at Pocket Gamer Connects on Monday. This is an event where game makers pitch their games in quick-fire sessions to a cadre of journalists, publishers, and industry experts.

It's a bit like speed dating, only with more video games and a slightly smaller chance of finding your soul mate.

Almost every game was impressive, inventive, and destined for some level of critical or commercial success. But only three games could be crowned winners, and walk home with the prize (and a commemorative baseball bat).

The winning game was AG Drive: a zippy, visually stunning spin on sci-fi racers like Wipeout. It's all about mastering the handling of your vehicle so you can drift around corners and rocket along tracks that are suspended high above the city.

Those slick visuals are powered by Zorg Entertainment's own engine, which can apparently pump out some 15 million polygons every second, and run at a solid 60 frames per second.

Electing to build your own game engine doesn't come cheap, of course. Which is one reason why creative director and ex-Housemarque developer Petsku Putkonen had to sell his retro Transformers collection on eBay to fund the project.

But his 17 year dream to make a flashy futuristic racing game is almost over and AG Drive, which is currently in soft launch in New Zealand, will launch globally on iOS and Android as a free-to-play game later this year.

You play from a towering isometric perspective, and try to weave an out-of-control car through traffic, cop cruisers, and billboards for as long as possible. Which you'll probably find is about 20 seconds.

But like any of these masochistic, rage-inducing games (such as Flappy Bird or Pivvot), you'll be raring to jump back in and have another go. Or try your luck on a different stage, which all feature unique cars and challenges.

Pako is currently available on Windows Phone as a free app. Tree Men will add more stages and drop the game on iOS and Android as a paid-for game in a few months.

Some games are tricky to explain in a three minute pitch. Others get their point across instantly. Mucho Party, a collection of mini-games that are played with two people on the same iPad, is immediately accessible.

Whether you're building higgledy-piggledy towers, running in a hamster wheel, or painting territory on a white battlefield, everyone can pick it up and start having fun.

Globz director Alex Houdent took a risk by spending a minute demonstrating the game's selfie feature. But seeing your pouting mug appear in a pink teapot when you lose a match made it all worthwhile.

After months of bringing his party game to just about every mobile event imaginable, Houdent finally launched Mucho Party on the App Store this week.

Other standout games from the VBIP include turn-based soccer game Buglantic Football, quirky cartoon point-and-click The Adventures of Bertram Fiddle, and comic gamebook Appointment with F.E.A.R.

Have you got an upcoming game that you'd like to get in front of journalists, publishers, and industry experts? Our next Big Indie Pitch is next week at Google I/O in San Francisco. Find out more, here.

Win a place on the PG Connects I Love Indie Showcase