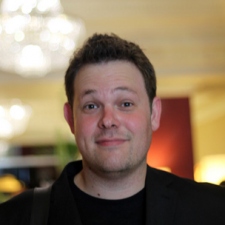 “How the f*ck does Mike Bithell do it?” asked former journalist turned PR specialist Simon Byron, speaking to a crowd containing the prodigal developer himself at this year's Develop conference in Brighton.

It is, of course, a question that's been on the lips of indie developers ever since Bithell sauntered onto the scene with his square-simulator, Thomas Was Alone. How can an indie be successful, how can they stay relevant, how can they be a better Mike Bithell?

The answer, explained Byron, can only be found by peeling back Bithell's onion-like layers and exploring the inner workings of a man that refuses to go away.

The first lesson indies need to learn is to share everything. Developers need to show their game to the world, and they need to do it from the word go..

“Win over the press, be opportunistic, and keep your eyes open for any opportunities. Make sure you appear on all radars.”

The importance of preparation, enthusiasm, and relentless, unbridled passion cannot be overstated, but indies also need to understand how crucial preperation really is.

“Be prepared and get people talking about your game, because Mike's relentless enthusiasm ensured that Thomas Was Alone launched with a profile it probably didn't deserve,” said Byron.

“Contact websites ahead of release, and, essentially, do whatever you can to launch with a bang.”

Knowing what to do is important, but it's also essential that indies know what to avoid, and, according to Byron, every single indie developer must do everything in their power to avoid becoming the next Peter Molyneux.

It might sound harsh, but, according to Byron, Molyneux's reputation now does more harm that good, and a man who was once revered for his grand visions is now heckled for his consistent failings. In short, explained Byron, there is "no more room for bullshit - being cryptic doesn't pay off”.

He continued, “Create personality, but don't dominate. Be careful how you air your opinions, don't become bigger than your products.

“The landscape is changing. People are picking up more via social media. Don't be afraid to try something different. Mike isn't and he consistently outperforms other institutions.”

Ultimately though, it doesn't matter how much indies try to be like Mike Bithell, because that gap has already been filled.

Yes, indies must learn from Bithell, aspire to achieve what he's achieved, and even dream of going one better, but they need to back themselves, believe in their own vision, and fight tooth and nail for success.

“Never ever ever give up, and work hard. I know starting from scratch might seem daunting, but stick at it,” concluded Byron.

“Have faith in what you're doing, and, again, don't give up, because one day I might be stood up here talking about you.”

How to get your mobile game press across Europe, courtesy of Simon Byron

The value of getting inside the mind of a gamer