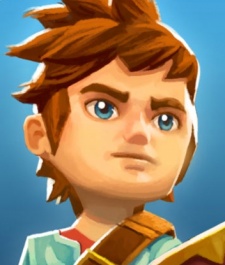 You probably all recognise Oceanhorn, the action RPG from developer Cornfox & Bros., because of its striking visuals, memorable gameplay, and the similarities it shares with a little game called The Legend of Zelda: The Wind Waker.

When Oceanhorn was unveiled to the public, comparisons between the two titles came thick and fast, with some even going so far as to brand the game a Zelda clone.

Animosity surrounded the game, and it's easy to see why those comparisons, and accusations, were made. However, Heikki Repo, Cornfox & Bros.' creative director, didn't set out to create Zelda on mobile.

In fact, the team drew more inspiration from JRPGs, and their mission to realise some long gestating childhood dreams was unapologetically honest

"In the beginning we just wanted to make a game that was missing from the App Store," opened Repo, speaking at this year's PG Connects conference in Helsinki.

"When I got my first iPhone 3GS, I was searching for a console style RPG adventure, and they were missing from the marketplace.

"I'm a big fan of JRPGs, and I really wanted players to have that kind of experience. This was a project where we could realise our childhood dreams."

No development process is easy though, and Repo had no shame in admitting that the road to success bore more than its fair share of speedbumps.

Instead of letting those problems snowball into something bigger, and risk derailing the entire project, the team decided to adopt a 'less is more' mantra, and made a game that focused on quality rather than quantity.

"When we were unsure as to whether we could make the game we wanted to make, we started to focus on the features that would have the biggest impact on Oceanhorn – [you want to] leap towards the final goal rather than small steps," said Repo.

"I wanted art assets I could use throughout the game because it was still a huge task doing such a big game. If you're willing to sacrifice some of the details and the fine tuning, you'll end up with a finished game.

"When it gets to the crunching stage, those who stuck their fingers in many pies are going to be very busy."